Romance in the Sunset Years

Mr Pathak had retired as a Deputy Inspector General (DIG) of the Border Security Force (BSF) about 10 years back. He was now well settled in life. But the boredom of complete order and perpetual silence in their three-bedroomed flat kept him ill at ease. He would often think wistfully how this very flat would be chaotic but full of lively sounds of laughter, when his children were young.

The children have gone their own way, leaving behind him and his wife to spend the rest of their lives.

After the long forty-five years of togetherness, not many words were needed to be spoken between him and his wife. Mr Pathak knew that his wife did not like to be disturbed when she watched her favourite TV serials for four hours every evening. So he ensured that she was not disturbed.

Mrs Pathak knew all about his food habits, personal likings and the timings of his regular medicines like the back of her palm. She could keep his blood pressure and diabetes under control by giving his medicines with robot-like regularity.

The topics of common interest had almost vanished from their lives since they had achieved whatever they wanted in life. There was nothing more to look forward to. So, now they would only wait through the year for their grandchildren to come home for a fortnight every year-end. But still there was a small problem. Their grandchildren would giggle at their pure Indian accent.

The grandparents, in turn, could hardly follow what the grandchildren would say in fluent American English.

The only time some spark would return to their lives was when they went for a yearly get together outstation with Mr Pathak’s batch-mates. They were all retired senior BSF Officers. Last year they had visited Renukaji in Himachal Pradesh. 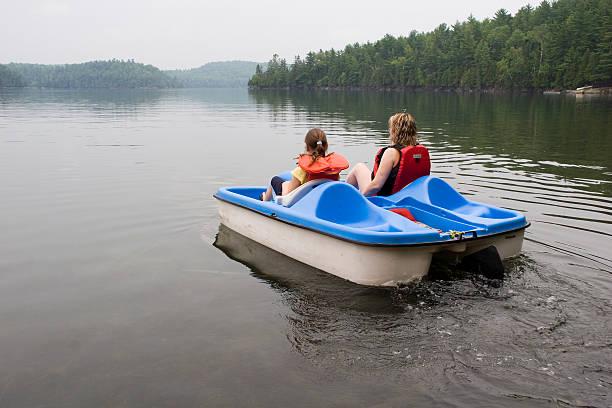 The central attraction of that place was its beautiful long lake nestling between two waves of tall mountains on both sides.

They could really let their hair down during such trips. They behaved as if they were still under-trainee officers in a hostel during such meets. One afternoon when everyone else was enjoying their afternoon snooze post-lunch, Mr and Mrs Pathak sneaked out of their hotel room and headed to the lake. They sat side by side in a small pedal boat that they hired for one hour and pedalled leisurely. When they reached the centre of the lake, they stopped pedalling. Their arthritic knees felt too tired to go any further. Their knees needed rest. At that mid-afternoon, youthful holiday-revellers were not around in other boats to disturb the peaceful atmosphere of the lake. Pathaks sat quietly and allowed the gentle breeze to take their boat adrift.

The water, just under the lake’s bank, on both sides of the lake, looked dark green by reflecting the dense forest on the mountain face. The water in the centre mirrored the azure sky, punctuated by white pieces of fluffy cloud lazily floating away to some unknown destination.

The crests of gentle ripples sparkled like diamonds in the mild winter sunlight. The tiny waves, coaxed by the playful breeze, kept rhythmically hitting the sides of the stationary boat…whish….splash ….whish…..splash…whish….

Showing off its bright orange beak, a milk-white solitary seagull pedalled past smoothly with its webbed orange feet, almost at a touching distance. It did not even care to look at the couple. It was looking for small fishes to surface.

At a distance, a deep dark water crow with its long snake-like neck continued to dive time and again underwater – as long as it could hold its breath. A blood-red dragonfly hovered around the boat for some time and finally sat on the bow (the front tip) of the boat. When no one disturbed it, it slowly lowered its pair of double wings. It started cleaning its huge pale blue composite eyes with its two forelegs.

After half a minute, the cleaning was done. It took off again to join three other greenish-yellow dragonflies, frolicking just a foot above the water surface. Gradually, the nature’s magic started casting its spell over the elderly couple.

Sitting side by side on the boat, they watched the opposite banks with a far-away look in their eyes. Their minds were busy reminiscing olden days. The naughty wind was trying to ruffle their salt and pepper receding hair.

Mrs Pathak remembered how dashing her husband looked in his uniform those days. Yet how awkward and nervous he was when he approached her to propose. She used to be mortally afraid of ghosts. She unmindfully smiled a little, thinking of how he would suddenly jump out of a dark corner putting on a white bed-sheet over his head and make her scream. He would try to cook one odd dish on some Sundays and completely mess up the kitchen. She would feel upset. Yet, she had to appreciate the preparation. They often used to go for family picnics when Rohit and Rini were toddlers. Those were such fun days!

Mr Pathak lost in his daydream, could almost visualise how young and beautiful Mrs Pathak would melt in his powerful arms. Then she would slowly lift her face, eyes closed, to meet his eager lips.

The wide-eyed new bride would admire whatever he did. She would appreciate his little jokes, and her spontaneous sparkling laughter would sound like a cascading spring.

He loved to watch her, applying vermillion on her centre parting of the hair, standing in front of the dressing table mirror. Then she would come and ask how she was looking. Those were the days!

After a long while, their eyes gradually turned and met. The trace of a smile crossed their brown lips wrinkled with age. No words were spoken; their eyes said it all. But both understood what the other felt. 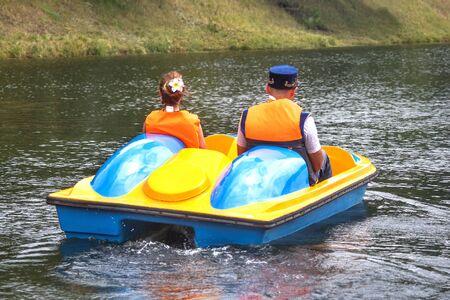 Mr Pathak looked at his watch. The one hour he rented the boat for, was about to be over. He said with a sigh, ‘Let us go’. They headed back to the jetty.

The rotating wheels splashing under the boat’s bilge (the bottom portion of a boat) did all the talking – all the way on their return journey.

For More Stories of Couples Read Now: Batter Half Vs Battered Half

Better Half Vs Battered Half

Untold Stories of Men in Uniform

8 thoughts on “Romance in the Sunset Years”